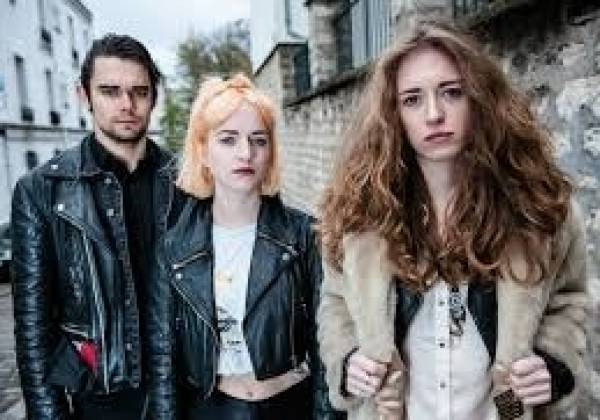 Being thirty minutes late for a club concert and when entering finding the club still empty, normally isn't quite a good sign. Not if the performing band is Bleech. And yes, you read it right - with two "e"'s.

Formed in 2009 in East London, with two released albums and more than 100 gigs around the world so far, the hype-grunge alternative rock band Bleech is ready for the big scene. There are three - the sisters Jen (vocals/guitar/piano) and Katherine (bass) O'Neill, and their friend from school Matt Brick (drums) - eager to prove that real bands without vocal boxes on the stage still exist. And certainly they did manage to do it on 27th May in one pretty small but exclusive rock club in Glockenbachviertel. They came on stage almost an hour late to find the selected audience impatiently waiting, being however a little shy to come close to the stage. "Come on guys, come closer", Bleech were completely casual and relaxed and opened with "Love is free", a single from their second album "Humble Sky". They label themselves as a grunge sound, however, hearing them live, it cemented the fact that they really blend between melody, alternative guitars and britpop catchy choruses. The three of them are quite honest about their music as well, as their main inspiration comes from Queens of the Stone Age and Metallica. Looking at their concert history, the band participated in a few britpop festivals like Camden Crawl and Y NOT. They also supported Wolfmother, Pete Doherty, the Charlatans, the Kooks and had a special attendance at ASH20, the 20th birthday celebration of ASH. In Munich, they played a blend of tracks from "Humble Sky" and their debut album "Nude", and fired up the crowd with "Here I am", "Flower hands" and "Marching". Of course there was "70's child" dedicated to all the concerned parties in the club. Although there's quite some road to walk ahead, they still kept an attitude of a rock band as if they played in front of thousands - stable guitar sound and powerful drums, rounded nicely by Jenny's rusty voice and humble appearance. Those guys just seemed to love what they do!

Their story started to be written in a small club in East London, where they performed, as Katherine explained, "in front of an old man, a dog and a transvestite", nevertheless their schedule nowadays looks quite full, with many live performances mainly in the UK. In Munich it was their first time, but they promised to come back. And in the meantime, their music is available for download on their official website.

Bleech is a band that won't exactly blow your mind away with a unique style and probably won't be the next Nirvana, however, they seem on the right way to have their space under the rock and roll sky of fame by keeping the positive attitude and solid belief in music. They definitely deserve a listen!

In view of the discussion about a compulsory offer for corona tests in companies, Labor Minister Hubertus Heil (SPD) has...

The conflict between Israel and the Palestinians escalated dangerously on Monday. After massive rocket attacks from the...

The Indian community in Germany is pulling out all stops to send help to fellow citizens back in India as the Asian...

Once again, Palestinians and Israeli security forces fought fierce street battles in Jerusalem over the weekend. At least...

At least 33 people were killed in an explosion near a school in the Afghan capital Kabul on Saturday. At least 55 others...

Health offices in Germany reported 10,976 new Corona infections to the Robert Koch Institute (RKI) within one day. In...