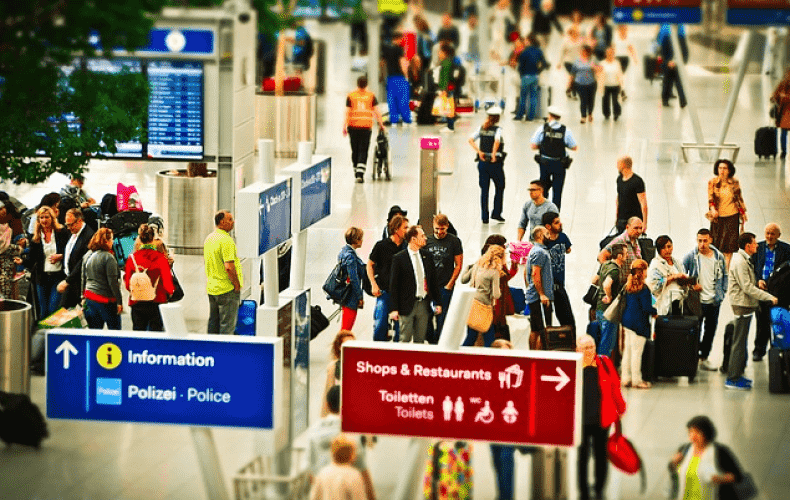 Shortly before the start of the Easter vacations, there were problems with baggage handling and waiting times for passengers at Berlin Airport early Friday morning. There were technical difficulties in the baggage conveyor system in Terminal 2 during the night on Friday, so the first departures in the morning were moved to Terminal 1, said an airport spokesman. This caused longer waiting times and delays, he said. That affected a "handful of flights," he said.

The baggage system has since been repaired, he said, and since 6 a.m. operations have been running normally again without any difficulties. According to the airport's website, just under 40 flights took off between 6 and 8 a.m. in the morning. Passengers are then usually already two hours before departure to drop off their luggage.

Former CDU member of the Bundestag Patrick Sensburg wrote on Twitter on Friday morning that there were too few staff to load the planes with luggage. Therefore, machines with passengers were on the ground waiting. His recommendation: rather plan two hours "on top". However, the airport spokesman stressed that the difficulties were not related to the tense personnel situation at BER and were purely technical in nature.

Due to the increased volume of flights at the beginning of the Easter vacations, the capital city airport is facing a stress test. It is expected on Friday with 70,000 passengers during the day, said the airport spokesman. A total of around one million passengers are expected during the Easter vacations, which last a good two weeks. This is slightly less than the approximately 1.3 million passengers who used BER in the entire month of March.

Heavy traffic is expected from Friday afternoon in particular, due to the high number of departures, as many families fly out for their Easter vacation. On April 24 - the Sunday before the end of the Easter vacations - a particularly high number of arrivals can be expected. Currently, there are no unscheduled delays or difficulties, the spokesman said.

The airport company had already called on passengers on Tuesday to allow sufficient time when arriving. BER CEO Aletta von Massenbach had then indicated that there were problems with staff shortages - not least the external ground service providers for baggage handling had lost many employees due to the move from Tegel to Schoenefeld and the Corona crisis.

Currently, he said, there is also always the risk of short-term outages due to Corona infections. In addition to baggage handling, von Massenbach had also cited security checks as a bottleneck.

"In principle, the staffing level at many partners for Easter travel is sufficient, but not comfortable," the BER boss told German Press Agency before the start of Easter travel. "That was still fine at the beginning of the year from January to March. But for these peaks that we now expect, the buffer can be lacking in staff at neuralgic points of the airport, such as in ground services and security."

In March, for the first time this year, more than one million people used the capital's airport BER. A total of 12,500 aircraft with 1.3 million passengers landed and took off last month, the airport company announced on Thursday. That was reportedly 2,500 planes and 350,000 people more than in February 2022, compared with just 4,000 planes and 220,300 passengers in March 2021, more than five times fewer passengers, it said. Before the pandemic in March 2019, the then Tegel and Schönefeld airports together counted 2.9 million passengers.

BER's Terminal 2, which went into operation on March 24, 2022, had counted 26,800 passengers. This is where mainly planes of the airline Ryanair land and take off. A total of around three million people traveled via BER in the first three months of this year, he said. According to the airport company, that is 1.2 million more people than in the entire first half of 2021.