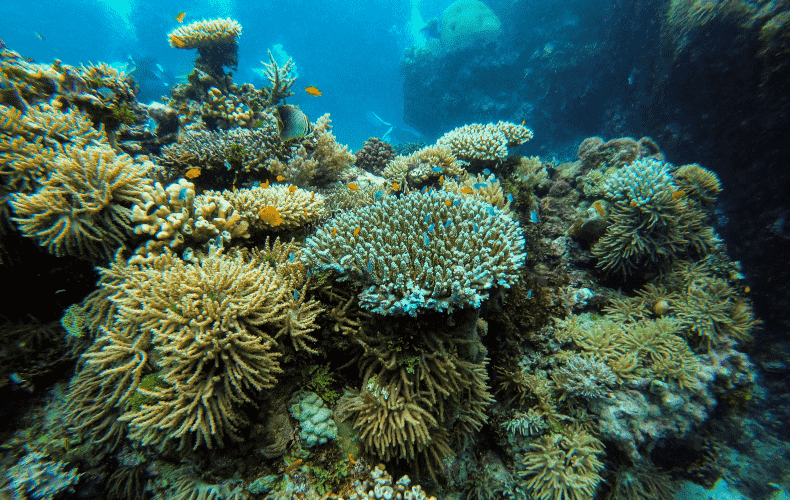 Relatively recently, a heat wave in the southern summer of 2016/2017 triggered coral bleaching with devastating damage to the Great Barrier Reef off the coast of Australia. But climate change is not the only threat to the reefs. Other factors, such as overfishing and overfertilization, are contributing to damage to underwater ecosystems worldwide, Mary Donovan of Arizona State University and her team report in the journal Science.

"This is a very interesting and important paper," says Sebastian Ferse, who studies the ecology of coral reefs at the Leibniz Center for Tropical Marine Research (ZMT) in Bremen, Germany, but was not involved in the study. "After all, until now there have only been individual, rather anecdotal observations for coral bleaching, but no worldwide systematic studies on connections between climate change and such short-term, local influences on the health of reefs."

The builders of the reefs' calcareous frameworks are stony corals, small polyps only a few millimeters long from the jellyfish family. They live in symbiosis with algae, which photosynthesize in the corals' skin and supply the polyps with nutrients.However, such communities only function optimally in certain temperature ranges of the tropics and subtropics. If the temperature is only a few degrees above the natural fluctuations in the respective region, the algae inside the corals produce toxic oxygen radicals and are therefore repelled. As a result, the corals lose their color, they bleach out, and often die after some time as well.Even with rapid and consistent climate protection measures worldwide, the climate would only react very sluggishly. Temperatures are expected to continue to rise for several decades before slowly falling again. During that time, heat waves in the surface waters of many tropical seas are likely to become more frequent, longer, and more extreme.As a result, many reef experts and conservation organizations fear that climate change could destroy a large percentage of reefs. Coral reefs would decline by 70 to 90 percent with a global warming of 1.5 degrees. At two degrees of warming, virtually all would be lost, the Intergovernmental Panel on Climate Change (IPCC) reported in its 1.5-degree special report, especially as other factors put additional stress on the reefs.

For example, rainfall from farmers' fields washes fertilizer and soil into the sea. There, the nutrients carried in fertilize algae that can overgrow corals and block them from vital sunlight. Such overfertilization is already causing significant damage not only to the Great Barrier Reef, but also to many other coral reefs. Soil particles washed into the sea from fields can have a similar effect: They can cloud the water, which then also transmits less sunlight.These factors diminish a reef's chances of recovering from coral bleaching, Donovan and her team conclude from their analysis of 223 coral reefs in the Indian Ocean, Pacific and Caribbean. For example, surviving stony corals sometimes find new algae as symbiotic partners, with which they rebuild the destroyed reef. Turbid water, however, somewhat diminishes these chances of recovery, the U.S. team reports. If, on the other hand, macroalgae overgrow the reefs, the stony corals are ten times more likely to die and the reefs are less likely to recover from the effects of heat stress.

Overfishing also promotes the excessive growth of macroalgae. This is because many of the fish caught eat macroalgae. If they are fished away, the macroalgae proliferate. Sea urchins also eat macroalgae. They can then multiply and also attack the reef directly. At very high urchin densities, Donovan and her team therefore find significantly poorer survival for reefs after coral bleaching, while low urchin numbers even have a small positive effect.

"Obviously, reefs can only cope with stress up to certain limits," ZMT researcher Ferse explains these relationships. If several factors come together and these influences intensify, a tipping point can then be passed at some point, at which the reef can no longer be saved after coral bleaching. The positive aspect of the study result is that compared to climate change, the further damaging influences can be slowed down considerably faster.

"For example, local fishermen are often responsible for overfishing," says Ferse. They are unintentionally destroying their own livelihoods. "If you educate the fishermen about the interrelationships, they can better protect the stocks and the fish populations can recover quickly," explains the ZMT researcher.It becomes more difficult with overfertilization and soil erosion, which lead to turbidity of the water near the coast. If the farmers and large landowners change their farming practices, they have little to gain from relieving the pressure on the reefs. They therefore need clear rules and, for example, subsidies for farming that massively reduces the input of nutrients and erosion from the fields.

"What would also help, of course, is a switch to organic farming and the corresponding incentives for it," saystt Ferse. "With coral reefs, we also see that climate change, biodiversity loss and sustainable development are closely linked," explains the ZMT researcher. "If we tackle these three fields together, we can achieve a win-win situation in which not only the coral reefs but also all other stakeholders benefit in the end."