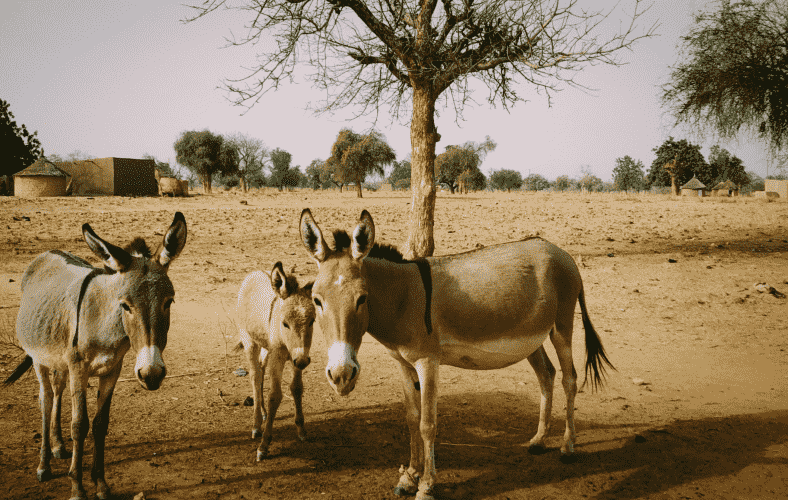 A few feral horses and donkeys scratch the sand with their hooves in the Mojave Desert until they reach the groundwater at a depth of one or two meters. Then they drink and move on. Feral, former farm animals that disrupt the fragile desert ecosystem. On the contrary, writes a group of researchers now in the journal "Science". The wells not only quench the thirst of horses and donkeys, but also mule deer, bobcats and other species use the water source. The digging behavior ultimately even increases the diversity of species in the "perforated" regions compared to other desert regions.

Erick Lundgren from the University of Technology Sydney and the University of Aarhus and his team tracked down the phenomenon by means of photo traps that they installed at the waterholes. They counted 57 vertebrate species quenching their thirst there - not counting species weighing less than a hundred grams, because they are too light to trigger the cameras.

They observed that in the summer months, when the natural water sources dry up, in many places only the holes dug by wild horses or donkeys remain. Species that otherwise prefer the natural sources, such as mule deer, which cannot survive without open accessible drinking water, then find themselves there. But even species that can otherwise meet their water needs through tubers, shoots, snakes and lizards, such as the collared peccary, have to resort to the wells during particularly hot periods.

Digging also influences plant diversity. Trees such as the Frémont poplar or the Goodding willow root much more frequently at quite a few waterholes that have been dug up by horses and donkeys but have been abandoned than at moist riverbanks in the same dry areas. This is because there the seedlings have too much competition from fast-growing grasses.

Could horses and burros help maintain desert biodiversity?
The role of horses and donkeys as well diggers is particularly important in regions where there are rivers, but they carry water only a few days a year after the rare rains. The bottom of these dried-up river valleys is usually sand and gravel, and the water table is often not too deep. This is exactly where the pawing hooves can best dig their water holes, which can be up to two meters deep.

In the course of climate change, such arid regions on earth could increase, rivers dry up, temperatures rise in summer and thus worsen the living conditions of many plant and animal species. Wild horses and donkeys and the water holes they dig could counteract the impending loss of biodiversity, Erick Lundgren and his team hope.

Jörg Melzheimer of the Leibniz Institute for Zoo and Wildlife Research (IZW) warns against jumping to conclusions. In Namibia, water holes dug by farmers, for example, do not have a good impact on the ecosystem. Originally, many animals migrated in response to rainfall and the resulting food supply. But since the farmers' wells have been in place, many have saved themselves the arduous migration and stayed, noted Melzheimer, who has been observing desert ecosystems for twenty years. That could lead to overuse of vegetation. Then the entire desert ecosystem could topple.

Deserts are extremely sensitive systems that can easily be disturbed to such an extent that it is almost impossible to return them to their original state. A forest in Central Europe, on the other hand, is completely different, says Melzheimer. It can be cleared and converted into farmland. "But just as a ball in a bowl always rolls back to the center, the forest in Central Europe also returns to its original state after a few decades if you stop cultivating it," says Melzheimer. "If you turn the bowl upside down and put the ball on top, this system is as fragile as a desert." All it takes is a little push, and the sphere rolls down and doesn't come back under its own power, "just as a desert, once disturbed, may never return to its starting point," Melzheimer says.

Thus, to assess whether the well-digging burros and horses are altering the ecosystem in the North American deserts in such a way that it tips into a new state from which it cannot return to desert, the effects of their digging should be monitored for much longer than three years, the IZW researcher says. After all, such negative effects can often only appear decades later. By then, however, the fragile desert ecosystem would probably already have been irrevocably destroyed.