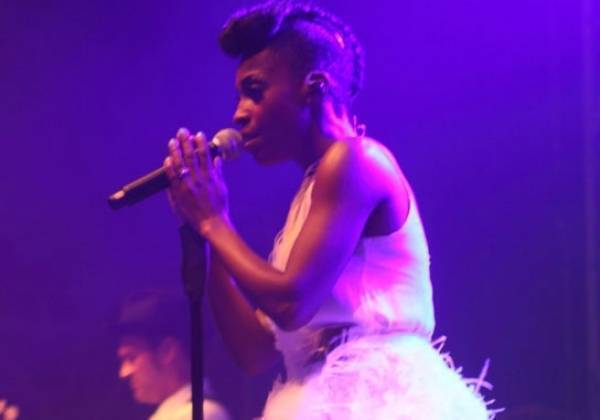 "Do you like my outfit?" Cheering agreement! "What about these shoes? - Ridiculous, aren't they?" Laughter and more cheering - her shoes indeed had ridiculously high heels. "And who wears red shoes tonight?" lead singer Skye Edwards asked and after some chatting. This was the bridge to David Bowie´s "Let´s Dance" - a great performance and absolutely in line with a great show.

Supporting group was the German electro pop duo 2raumwohnung who came with an amazing set of visuals and gave a fresh and cheerful performance.

The concert wasn't sold out, so I was standing right in the front and had a really good view of the stage. Edwards seemed to appear from the mysteries of a fairytale with her swan-like feather dress and mohawk haircut. This woman has such a beautiful personality and you could see it spreading out, catching anyone that was close enough. All nearby fans had a permanent grin pinned to their faces throughout the concert as Skye´s suave voice hooks you and carries you away into her world.

In preparation for the concert I had started listening to Morcheeba songs for the first time in years and I wasn´t thrilled. I perceived most of them as too slow, without a twist and some sounded to me like awful country songs. During past years this has been a problem the band was often confronted with. Morcheeba producer/guitarist/songwriter Ross Godfrey openly spoke in an interview for The Quietus about how they are regarded as uncool and mellow. Once, Ross Godfrey walked into Rough Trade Records where he found a white label record of the song "What New York couples fight about" with a note saying: "I know this is Morcheeba, but it´s actually quite good and you might like it".

The band went through difficult times but now they are back - they seemed to stand in unity on stage after the founders Paul and Ross Godfrey had been experimenting with different singers and struggling with a period of not so well-received records.

The songs were actually not as slow as I had perceived them due to the fact that the band's latest album "Head up High" from 2013 is more up-tempo than all the previous ones with 150 bpm compared to their usual 70 bpm. The record features guest musicians such as Cahli 2Na, Rizle Kicks and Ana Tijoux, Nature Boy Jim Kelly and James Petralli. It is not as funky as some songs from "Blood like lemonade" which was their first album after the Godfrey Brother´s reunion with Skye Edwards but you´ll find some sparkly treasures such as "Gimme your love", "Call it love" or "Make Believer".

At the end of the show, singing "I'll fall apart", you could taste the tenderness in her powerful voice, and as the audience held their phones aloft in the air, listening to this "creature released from a fairytale, I was carried away into her world" Skye Edwards!

Drawn to the fine arts Nina Bayne is reporting about concerts, events and exhibitions taking place in Munich. More on www.ninabayne.com