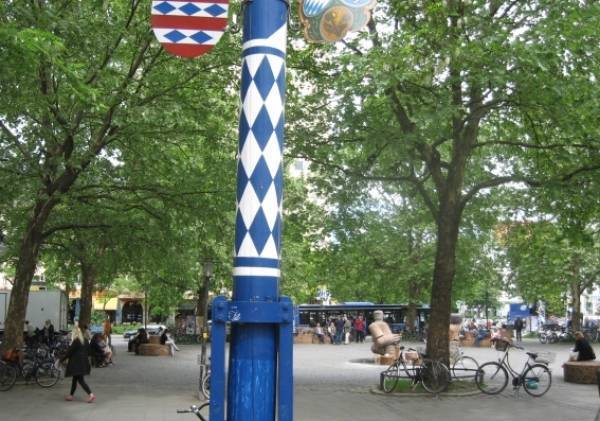 Wurst = sausage Würstl = sausages, and is also the diminutive. Würstl Stand is a 'little sausages stand'

I, like about half of Munich, chose this past Sunday to take a nice long bike ride along the Isar. It was great afternoon, though hazy, to work off some of the frustrations from the previous week. So when I woke up on Monday morning, with that bit of fitness in the bank, I decided it would be the perfect reason (my wife says excuse) to continue my search here in Munich for the best Wurst. Today I went to Rotkreuzplatz (Red Cross Place) and I arrived at Rotkreuzplatz at exactly 12:00 pm.

Oh, how I miss this place! I used to live about 7 minutes walk from this platz, about 8 years ago and I truly believe that few areas of Munich summariz the idea of many villages in a large city better or more completely than Rotkreuzplatz. This area should be on any tourist's agenda if they are looking for the real Munich, and I did notice that the double-decker tourist busses cruise through, so somebody else agrees with me. You can get there by myriad of ways including Underground and Tram.

Named for the local hospital where quite a few natives were born (yes, some of the people who live in Munich are actually from Munich), it is complete with its own Maypole (Maibaum) that pokes up between the 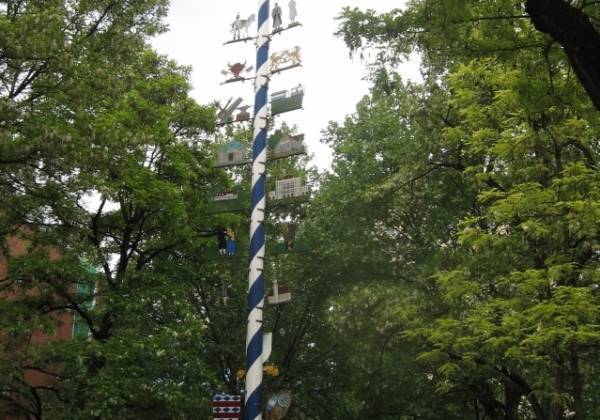 canopy of chestnut trees, a few fruit and vegetable stands, and a plethora of small eateries, cafes, bakeries and butchers. There always seems to be some kind of street music (today was real interesting-some kind of Nepali Buddhist music played by a witness to the 60's Peace Movement in Vondel Park, Amsterdam), on Thursdays there is a Farmer's Market, and in the center of the platz there are some kind of statues that seem to have been dragged from Easter Island, except they are set with small coloured tiles. Children love to use the statues as a hiding place, when playing hide-and-go-seek, or better yet, ambushing pigeons. In summer, it's also a fountain. If you walk a few blocks along Schulstraße (Sarcletti's is on the corner), you can find "Mercado de Mexico", quite possibly the best place in town to get authentic Mexican food, though it's a bit steeper than what I was used to paying in the States. If you are in the mood for Asian food, there is a great market on Leonrodstraße, just a few minutes beyond the Deutsche Bank. There are about 14-18 brick benches to sit on-half that face inwards toward the center or half that face outwards toward the crowds (Rotkreuzplatz is always busy, even on Sundays due to the THREE ice-cream shops in close proximity that are open, though many who live in Munich would tell you Sarcletti's is the best), and the benches also have the same tiles as the statues, very cool indeed. But beware: like the Stammtisch (local's table) that many beer halls have, Rotkreuzplatz seems to have a few reserved benches for the local philosophers and drunkards, so if you get the German stare, nothing personal but you're sitting in someone's spot, and simply move to another bench or ask if it's OK to continue sitting. The answer will be "yes", but be prepared for some lengthy conversations ranging from Goethe to Greece. Oh, and by the way, Hoch Bayerisch (High Bavarian) is spoken here! 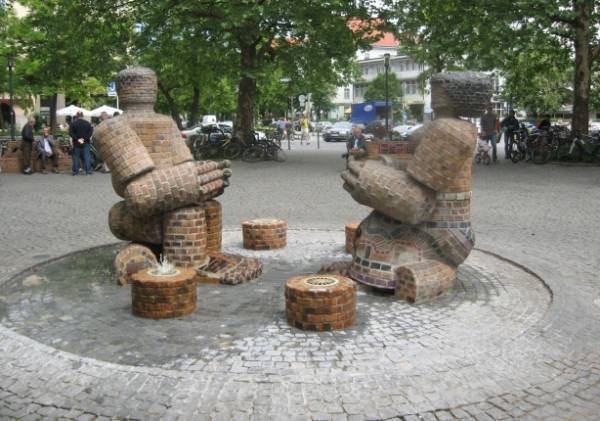 After reminiscing for a few minutes, and listening to happy hippy, Buddhist, Pan Flutist guy, I decided to check out the Würstl stand, Curry Edition, which is situated around to the right of the Galeria Kaufhof, just past the flower shop. I lurked and loitered in the periphery and watched as a few customers walked up and nonchalantly ordered their snack. The service person was a bit distracted by the newspaper he was reading. But the victuals more than made up for this shortcoming. They really do have a great selection of Würstl, Currywurst being the specialty. You can choose from a variety of Würstl to be smothered in their sauce. I had a basic Currywurst and it did not disappoint. In fact, it was, without any exaggeration, the standard that I will forever measure all Currywursts in Munich by. It was delicious. The butcher they use is Remagen, which has been in existence since 1718! Benjamin Franklin was born a mere 12 years earlier! The sauce is homemade, and it shines through. My timing was great as the sausages had just the right amount of juice left inside, with the casing seared to perfection, in anticipation of the "Mittagspause" (lunch break) crowd. There are also many different kinds of specialty sauces including a "Sate-Erdnuss" sauce, which is a ginger, soy and peanut butter sauce, but I will save that for another day. Another interesting aspect, and for those northern Germans it will make perfect sense, 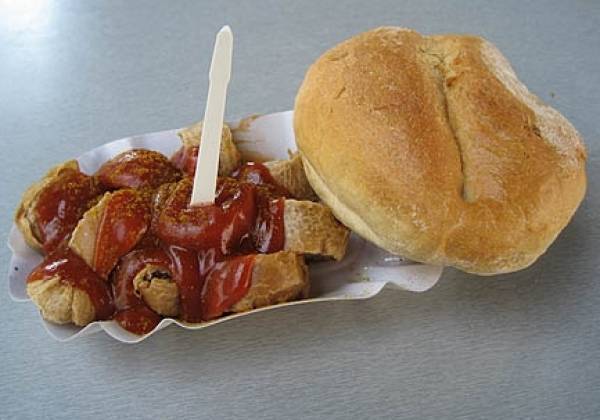 the bread roll is called a Brötchen here rather than the Bavarian word Semmel, and this only reaffirms the whole idea that Currywurst is a northern German meal. Perhaps the only complaints I could muster is that the three standing tables do not look out over Rotkreuzplatz itself, the price is a bit high (2.70 EUR), the sun was intermittent, and I would have liked a dash more of the curry powder on my order. But I am really nit-picking at this point.

One of the first things I did when I moved to Munich was to buy a bike, and I rode that thing up and down every street I could exploring the city. And two of the places that stood out in my mind, of many I might add, were Rotkreuzplatz and Elisabethplatz. Though much has been renovated in the past few years at Rotkreuzplatz, one can almost see the joy and nostalgia in the old-timers' eyes as they shuffle along in their beautiful hats and earth tone outfits. It is almost as if time has kind of forgotten this place and left it the way it was around the time of the 1972 Olympics, the Munich that was desperately trying to put its past behind it. Though some of the shops and restaurants may sell lemongrass and tortillas, or Thai soup and Shepherd's Pie, the feeling remains the same. Rotkreuzplatz and the area around it are a great place to live or visit, and experience the best of city life in Germany.

All content brought to you by The Munich Eye News.