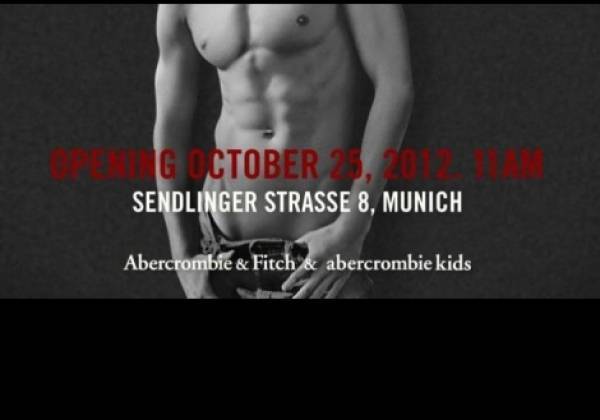 Tomorrow marks the opening of the new Abercrombie & Fitch store in Munich.

The long-awaited and much rumored Abercrombie is opening this week in Munich. Leading up to the store opening, Abercrombie did what they do best, shirtless men with washboard abs. Oh, and of course, with a side serving of preppy clothing.

Chiseled and buff boys lined the Sendlingerstrasse from 10 am to 5 pm on Saturday, clad in Red Jackets and Abercrombie denim, drawing attention to the store itself, whilst others were driven through Munich in a convertible bus, days before it is set to open. True to Abercrombie's marketing policy, no billboards or ads went up...it was all done naturally, using live models.

Abercrombie will be opening one of its largest stores, at 3300 square meters, in what used to be the Sueddeutsche Zeitung building on Thursday 25th November. Throughout the entire summer, recruiters in the city center have been scouting for people to work the massive store, inviting them to a job interview where many people were then offered jobs. Unfortunately for Abercrombie Munich, whilst excitement to visit and shop the store was high, not as many people were actually interested in working there. Some people received up to 7 phone calls in attempts to be hired, but an unexpectedly low amount of these calls were actually successful.

Upon its opening, the store is expected to be packed full of tourists and locals alike, since this opening of an Abercrombie & Fitch in Munich has been rumored for a few years now. Finally Munich will now have an Abercrombie too, making the adored American brand a little more accessible and a little less exclusive.